What would you do during a gap year from university? Faith Sim decided to take the challenge of going from backstage to front-of-stage with young & W!LD. Here, she tells us about what she’s learnt from acting, writing, designing and assistant stage-managing Little Riots and Other Stories, young & W!LD’s first showcase.

I don’t think I can remember specifics, really. But I was very young, and it was probably at speech and drama classes that it happened. I was quite a bookish child, and the idea of having individual stories of characters develop into something bigger fascinated me. Somewhere along the line, I came to the conclusion that it would be very nice to do this for a long time. Also, there is a strange otherworldly feeling that theatre lights bring. I don’t know what it is. But it’s addictive.

I was in English Drama and ELDDS (Drama) in primary and secondary school respectively. When I went over to Melbourne, I spent a little bit of time getting involved in the University of Melbourne’s student theatre scene. I sat on the board of The Rock Opera Company for two years and dabbled in a tiny bit of ensemble, sound and publicity work. I wish I could’ve been less afraid to get more involved, but I really think I’ve learned quite a bit from watching the people in student theatre take risks and solve problems, both front and backstage.

A lot of the theatre work you’ve done has been behind the scenes. What do you like about working on both sides of the stage?

In short: the bonds. Theatre requires serious teamwork, no matter the size of the production, and often that means you’ve got to be honest with your fellow cast/crew members. That kind of honesty, coupled with the shared goal of putting on an awesome production, often creates deep interpersonal connections within the cast and crew. I like the skills one learns both backstage and front-of-stage, certainly, but the bonds are what keep me coming back.

You were involved in the Melbourne cosplay community. How does it tie into your love for theatre?

Funny story: I started wanting to cosplay due to theatre. The basic idea behind the two activities is largely the same – to bring characters to life and portray them well. Cosplay differs from theatre in that you have the option to work alone, but that means you have to take on virtually all the production roles yourself. The upside to going it alone, however, is that you have zero limits (within legal boundaries, of course) in terms of character choice. It allowed me a lot of freedom to explore character types I wouldn’t normally do in theatre. Ninjas and goblin kings and cabbage merchants, among other things. Helpfully, Melbourne’s cosplay community encourages people who want to try new characters and types. I feel that being in the cosplay community definitely broadened my horizons.

Why not? 😀 I thought that the gap year I took from Melbourne U would mean the end of doing theatre for a long time, but thankfully, I was mistaken. Also, young & W!LD seemed like the kind of place where there’d be a really collaborative sort of energy, and where stratification didn’t really happen. (Spoiler: it is what I thought it was!)

young and W!LD has been going strong for four months. What have you learnt about your craft and yourself during this entire process?

We learned quite early on that being too precious about your work won’t get you very far in a group-devised piece. However, I also learned that some things should be defended in the process of devising, if only so that the main message your piece tries to send doesn’t get lost. It’s a delicate balance. While we were crafting our first showcase, I was afraid to suggest things I wanted to keep, but I know I need to get braver. Also, making mistakes is normal and really quite underrated, if our creation process was anything to go by. Some of our happier accidents happened that way.

Backstage, being assistant stage manager was a new experience. So much to think about! So many people to liaise with! I learned I was pretty good at communicating, but that my ability to manage people has much room for improvement. Fortunately, I was in very good hands, and received advice both from Serena and the W!LD RICE production team. Perhaps I’ll do it again sometime, and get better at planning seating plans and bump-in schedules (among other things).

You’ve just had your first showcase with Little Riots and Other Stories. What was it like to craft your own monologue and perform it as part of the stories told by your group?

In Little Riots and Other Stories, I played a vampire who critiqued vampire films. Admittedly, I struggled to come up with a monologue I actually liked, but near the end of the first-draft deadline, I remembered a very stupid question I had asked on Facebook about vampires and AIDS. From there, I started to wonder how vampires would feel if they had to live in the 21st century and endure their (sometimes terrifyingly bad) onscreen representations, and I went on a little bender where I watched all these films at one go and did play-by-plays of them. After some vetting, it formed the bulk of the original work I sent to Rodney and Serena. Much of that piece got distilled in the devising process, but I think, in the end, it worked well enough for the purposes of Little Riots.

Everyone in my group was awesome. We bonded a lot over the rehearsals and production run and, near show-week, Serena observed that if you took one of us out of the room, the entire feel of the production would change. It was great working with everyone, and I’m really stoked for whatever lies ahead already. 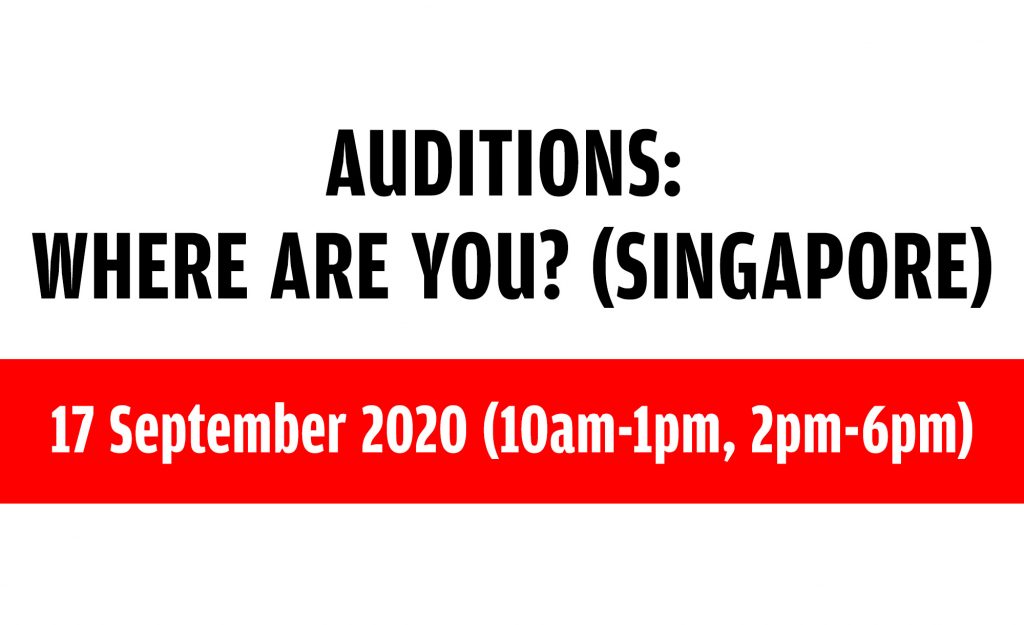 AUDITION NOTICE: WHERE ARE YOU? (SINGAPORE)