Rebekah Sangeetha Dorai plays Miss Air India in Boeing Boeing. Get to know this actor, bargain hunter and Shakespeare fan before you fly the friendly skies with her in June!

I grew up dreaming of becoming a superstar. My entire life, I had always wanted to be on stage – singing, performing, interacting, communicating, anything! Growing up, my family didn’t have much, and our circumstances were often challenging and painful. My mom tried her best to make sure we had enough, but there were days it got incredibly difficult. Art was and is, in so many ways, my escape from those difficult moments.

A lot of people don’t know that I am always clipping coupons, looking for the best deals, snapping up discounts, waiting for the prices to go down…once, I waited three months for the price of a microphone to go down. It was worth it though. I got a 72% discount and only paid $84 for a mic worth over $300!! Very good leh!!! My family didn’t have a lot and I always felt guilty about rewarding myself while we were struggling. I am kinder to myself now; it’s okay to treat yourself once in a while lah. While I do make sure I’m responsible with money, I also leave some room for what my heart desires.

One thing on my bucket list is to perform in as many countries as possible. I set myself a goal of performing at least one show a year overseas. I want to learn from Singapore and give to Singapore; this is my home. But I don’t just want to stay here. Stagnancy makes me incredibly frustrated. I want to be always moving, always growing, always learning. And travelling is one of the best ways to do all three. Nothing compares to connecting with someone who doesn’t speak the same language that you do – and then seeing in their eyes that they understand you. Theatre is beautiful like that. It’s universal.

The first time I set foot on stage, I was incredibly nervous. I was feeling so many different things and at so many levels, all at the same time. What can I say – I’m a woman. We multi-task even feelings! But nerves are good. If I go on stage and I’m not feeling anything at all, it’s a sign for me that something is wrong. I don’t want to be too locked or tense that I can’t get into character, but I also don’t want to be so relak to the point where I don’t care what happens!

Performing live is something I love so very much. I am honoured to be given a space to bring someone’s story into existence. To breathe life into a character. To make people laugh. To connect. To sing a song lyric and lock eyes with someone and have tears fall from both of our eyes at the exact same time. At that moment, we are the same person, for a short while, even if I don’t know his or her name. Performing live is incredible power – and one that shouldn’t be taken lightly.

Theatre is family. We are an oddball group of people who do so many things and it’s incredible to live in this large, crazy family. We all have our little kampongs and each kampong speaks a different theatrical language. Even if there are moments when we might not like or agree with what the other is doing, we still find room for and support one another. It’s wonderful. And it’s my home away from home.

The show that changed my life is Macbeth. My understanding of the show and my affinity with it have changed as I grew older, and it taught me that no one is ever fundamentally bad. People do things for various reasons, and everyone is capable of grave mistakes, just as they are capable of monumental good. It all depends on the choices we are given and the roads we eventually take. It was and is a huge learning lesson for myself, my relationship with God, and how I see others. The tattoo I have on my lower left forearm is the Indian version of Lady Macbeth’s lines from Act 3, Scene 2.

I can’t wait to perform in Boeing Boeing because it’s a W!LD RICE show!!! The first big show I ever watched in Singapore was La Cage Aux Folles by W!LD RICE in 2012. At the time, I had a billion reasons, fears and insecurities and told myself I might never work with this company. Five years on, and here we are! I am so glad to be a part of the W!LD RICE kampong; they’re an amazing group. Boeing Boeing is a hilarious show with a remarkable cast, and some more it’s been adapted for the local audience – which means, wah, it’s gonna be a whole lot funnier! Fun fact: it’s a hit with Indian audiences, having been adapted into Malayalam, Telugu, Hindi and Kannada versions. And I’m gonna be adding some Tamil spice into this one. Just come watch lah! 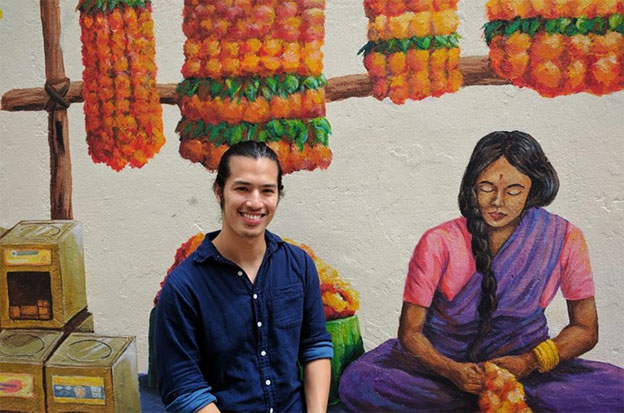